The Musicians of Bremen

Do you enjoy the podcast, but you want someone to speak to in English? You have learned all these cool new words, and now you want to start using them!

Well, I want to tell you about italki. italki is the world’s biggest online language learning website. On italki you can take classes with teachers from any country, and you can take classes at a time that is good for you. You get private lessons with excellent teachers, and it’s much cheaper than normal classes.

I have been both a teacher and a student on italki, and it has helped me so much. If you are like me, you don’t want to take a long course, but with italki you can take lessons when you want, how you want. You can have a conversation class on the bus, or an exam class with lots of homework. There is something for everyone.

Oh, and if you use that link, I get a bit of money, so you’re helping me, too. Thanks!

So that’s EasyStoriesInEnglish.com/italki. Take your English to the next level today!

A musician is someone who plays music. So guitarists, piano players and singers are all musicians.

A donkey is an animal like a horse. Donkeys go HEE-HAW! Eeyore in Winnie the Pooh is a donkey. You can ride donkeys, and they often work on farms.

The master of an animal is the person who owns it. So if you have a dog, you are its master. For example, in Scooby Doo, the master of Scooby Doo is Shaggy.

A thief, and the plural is thieves, is a person who steals. They might steal bread, money or computers. Aladdin is a famous thief from fairy tales.

A monster is a horrible person or animal who is very dangerous. For example, vampires, werewolves, mummies and zombies are all monsters. Monsters often eat people.

Scream is when you go [screams]. It is a very loud sound. People scream when they are scared or very angry.

Bite, and the past tense is “bit”, is when you put your teeth in something and hurt it. When you eat food, you bite it first. Dogs might bite someone if they are dangerous. Insects also bite people and they can be very annoying.

Scratch is when you do this: [makes scratching sound]. Basically, you rub your nails against someone. You might scratch yourself because you are itchy. Maybe an insect bit you and you scratch the place it bit you. Or maybe you don’t like someone and you scratch them. Cats like to scratch things a lot.

A big thank-you to our new patrons, as well as patrons who have increased their pledge: Igor Deynega, So Fast, Cherry Blossoms and Vila He. Thank you so much. Your support really means a lot to us.

The Musicians of Bremen

Once there was a donkey who lived with a farmer. The donkey was very old. Before, he had worked every day in the fields and carried many heavy things. Now he was old, and he found it hard to carry heavy things. One day, the donkey was carrying a very heavy bag of food and fell down.

‘Now this is bad,’ said the farmer. ‘I need a strong animal who can work for me. If the donkey can’t carry things, I don’t need him. I will have to kill him tonight.’

The donkey heard this and was very afraid. He didn’t want to die! But what could he do? If he went to another farm, they would not want him, because he could not work.

But the donkey had heard of a city called Bremen. In Bremen, there were lots of musicians, and if you played good music, you lived well.

‘I have always wanted to learn to play the guitar,’ said the donkey. ‘I think I would play it very well.’

He did not have a guitar, but that did not matter. So the donkey left his master and started going to Bremen.

The road to Bremen was long. After walking for an hour, the donkey saw a dog on the road. The dog looked old and sad, and had lots of grey hairs.

‘Why are you so sad, old boy?’ said the donkey.

‘My master wants to kill me! Before, I ran through the forest and killed pigs, but now I am old, and the pigs are too fast for me.’

‘Don’t worry, old boy!’ said the donkey. ‘I’m going to Bremen to become a musician. I’m going to play the guitar. Come with me!’

‘Wow!’ said the dog. ‘I have always wanted to learn to play the drum. Yes, I’ll go with you to Bremen!’

So the donkey and the dog started going to Bremen.

The road to Bremen was long. After walking for two hours, they saw a cat on the road. The cat looked old and sad, and had lots of grey hairs.

‘Why are you so sad, you old cat?’ said the donkey.

‘My master wants to kill me! Before, I killed all the mice in the house, but now I am old, and the mice are too fast for me.’

‘Wow!’ said the cat. ‘I have always wanted to learn to play the violin. Yes, I’ll go with you to Bremen!’

So the donkey, the dog and the cat started going to Bremen.

The road to Bremen was long. After walking for three hours, they saw a chicken on the road. The chicken looked old and sad.

‘Why are you so sad, Mr. Chicken?’ said the donkey.

‘My master wants to kill me! Before, I cried every morning at the same time. But now I am old, and some days, I forget to cry in the morning.’

So the donkey, the dog, the cat and the chicken started going to Bremen.

The road to Bremen was long, so night came, and they decided to sleep inside a forest. The donkey, dog and cat lay down by a tree, and the chicken flew into the tree. They had no food, and they were very hungry, and it was cold.

‘I see something!’ said the chicken. ‘There is a house in the forest, and there is light inside. Do you think they have comfortable beds and food?’

So they went to the house and looked inside. Inside, there were five men. These men were very bad men—they were thieves. They liked to steal from people. But the musicians were not interested in the thieves, because in the house there was a table, and on the table there was lots of food and drink: bread, cheese, nuts, cake, wine and beer. And in the corner, there were comfortable beds.

‘Wow!’ said the donkey. ‘We must get inside and eat all that lovely food and sleep in those comfortable beds.’

‘Hmm,’ said the dog. ‘Usually, if you play music, people give you money and food, right?’

The thieves were very afraid, and thought it was a monster. They ran outside and through the forest.

They ate all the lovely food and drank all of the beer and wine, and then went to sleep in the comfortable beds.

The thieves ran and ran, but then the leader of the thieves said, ‘Stop! That was no monster. I don’t believe that monsters exist. And that is our house! I will go back and kill them.’

‘MEOW!’ screamed the cat. She jumped up and scratched the thief’s leg.

‘OW!’ screamed the thief. He fell on the dog.

‘WOOF WOOF!’ cried the dog. He bit the thief on the leg.

‘Augh!’ screamed the thief. He ran outside and ran into the donkey.

‘HEE-HAW!’ cried the donkey, and kicked the thief in the stomach.

Finally, the chicken woke up and flew onto the thief’s head. ‘Buck-caw!’

The leader of the thieves screamed and ran away. ‘It is a monster, it is a monster!’ he cried. ‘I will never come back to this forest again!’

So the musicians went back to their home and slept. In the morning, they spoke.

‘Shall we go to Bremen, then?’ said the dog.

‘I don’t know,’ said the cat. ‘It is such a long way, and we have no musical instruments.’

‘I don’t need a musical instrument,’ said the chicken. ‘I can sing.’

‘Maybe we don’t need to go to Bremen,’ said the donkey. ‘We have a nice little house here, and we can probably find food in the forest.’

And it was true. They were very happy in their little house, and they found nuts and fruits in the forest to eat. So in the end, the musicians of Bremen never actually went to Bremen, but that does not matter, because they were the best of friends.

The musicians of Bremen

I hope you enjoyed today’s story. You probably know it already. It is a very famous story around the world. Bremen is a real city in Germany, and if you go to Bremen, you can see a statue of the musicians of Bremen: the donkey with the dog, the cat and the chicken on his back. I will put a picture of that at EasyStoriesInEnglish.com/Bremen.

Last week, I talked about the Black Lives Matter protests in America, the protests about police brutality. These protests are still happening. They are not showing so much on the news, but I want to remind you, you can find links and information about giving money at EasyStoriesInEnglish.com/RedMountain. And remember, if you do give money to one of these organisations, I will give you all of the bonus episodes for Easy Stories in English for free. So that’s seven free episodes!

At the moment, there is a lot of protests happening everywhere, and one thing that has been happening specifically is moving and removing statues. So, many statues are coming down in the United Kingdom and in America because they are statues of people who did very bad things; statues of people like Christopher Columbus, Edward Colston and so on—people who sold slaves, who had a big power in people’s lives and caused the death of millions of people, actually. 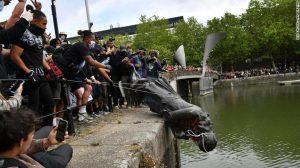 Edward Colston being thrown into the river 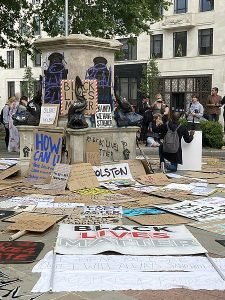 The plinth (place of the statue) afterwards, by Caitlin Hobbs under CC BY 3.0

One statue in the centre of Bristol was Edward Colston. I just mentioned him. He sold many slaves throughout hundreds of years, I believe. And his statue was pulled down during a protest, and the protesters threw it in the river.

I think this is a fantastic thing because what happens with these statues is, people say, ‘No, we can’t remove it! It’s part of history, it’s so important, we can learn from it.’ Or they say, ‘Oh, we need to discuss it!’ So people talk about removing the statue for ten years and they never remove it. Finally, when people remove it themselves, it’s a very powerful moment and I think it shows what people really want.

Anyway, are there any statues of historical people in your country that you think are bad? Maybe statues that should come down, or statues that have come down. I would love to know. Go and leave a comment at EasyStoriesInEnglish.com/Bremen.

Talking Animals
8 comments on “The Musicians of Bremen”