Listening to podcasts like Easy Stories in English is a great way to improve your comprehension skills, but sometimes, you just need to speak.

It’s scary, I know, but help is here. On italki, you can find teachers from around the world to practise English with. It’s cheaper than in-person classes, and you can find the perfect teacher for you. Plus, you can take lessons anywhere—at home, at school or even on the bus!

To get started on italki, go to EasyStoriesInEnglish.com/italki. If you use that link and buy a class, you’ll get $10 free to spend on more classes! Plus, I get a bit of money, too. Thanks!

So that’s EasyStoriesInEnglish.com/italki. Take your English to the next level today! 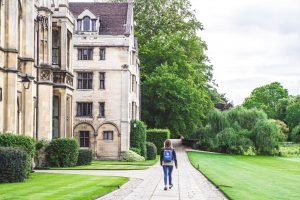 A while ago I went to visit a friend in Cambridge. Cambridge is a city about 40 minutes away from London by train, but of course you probably know it because of the university. The University of Cambridge is made of 31 colleges, which are kind of like smaller universities within the main university. I studied at King’s College, Cambridge. I graduated in 2016, which means I finished studying there. This was the first time I came back to the city after graduating.

I was a bit worried, because I didn’t have a great time studying at Cambridge. I thought the city might have lots of bad memories for me. But actually, I found the opposite. The city didn’t have a strong effect on me. I had lots of memories which I told my friend about, but it felt like a very different part of my life. I had moved on—those feelings didn’t have an effect on me anymore. 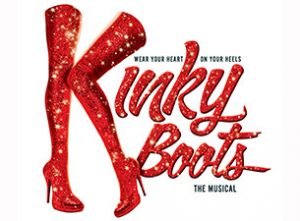 The poster for Kinky Boots

Part of the reason I visited Cambridge is because my friend invited me to go see a play with her. She does a lot of theatre in Cambridge, and she had some friends performing in a show called Kinky Boots. Kinky Boots is a musical, a play with singing in it. It is about a factory owner in the north of England. The north of England is an area that used to make a lot of money, but now doesn’t—it has a weak economy. In Kinky Boots, the man owns a shoe factory, but they are not making money. So he decides to change the family business and make shoes for drag queens.

Drag is a kind of performance art where people play with gender—drag queens are usually men who dress up as women, and drag kings are usually women who dress up as men. Anyway, in Kinky Boots, the shoe factory starts making boots for drag queens, because most shoes are not made well for drag performers. It is a very funny show, but it is also heartwarming—it has lots of bits that make you cry as well. And the music is great.

I really enjoyed watching the show. It wasn’t a professional performance, but it was still really good. Afterwards, we went to the after-show party—when actors finish doing a show, they usually have a big party at the end. It was very fun. We also went to a festival called Strawberry Fair during the day, so it was a very long day!

If you want to see some pictures from the day, go over to the transcript at EasyStoriesInEnglish.com/Experiment, or follow me on Instagram @arielgoodbody.

This story does contain some mathematics. I hope that’s OK. If you find it confusing: don’t worry, so do I! But you should still be able to understand and enjoy the story even if you’re not great at maths.

A disaster is when something really bad happens, something truly awful. For example, coronavirus could be called a disaster. An earthquake, tornado or tsunami is a natural disaster. If you fail an exam completely and get 0 marks, it is a disaster.

An earthling is someone who lives on our planet, planet Earth. ‘Earthling’ is a word that’s often used in science fiction books and films. The aliens call us earthlings, because it makes us sound more strange.

Magnesium is an element, one of the basic things that make up the universe. The chemical symbol for magnesium is Mg. Magnesium is very important for our bodies. For example, some people take magnesium pills to help them sleep.

An error is a mistake, when you do something wrong. We use ‘error’ to talk more about machines and computers. For example, many people will remember using Windows computers growing up, and hearing this awful error noise: [Windows error sound]. That means something has gone wrong with the computer, and sometimes you have to fix the error.

Coding is programming, when you write programs for computers. Coding is quite a difficult skill. Some people say coding is like learning a new language. Actually, coders use separate programming languages to write code, such as Python, Java, C++ and so on.

Dogs don’t shout like people, they bark. When a dog barks, it sounds like woof woof. Dogs usually bark because they are angry or scared.

When someone is going to have a baby, they are pregnant. They have a pregnancy. Pregnant people have big stomachs, because there is a baby growing inside them. Pregnancies usually last nine months before the pregnant person gives birth. If the pregnancy is much shorter or longer, it can cause problems.

Heaven is the place where good people go when they die. There is Heaven in most religions. Heaven is where God lives, and it is a very happy place.

Your lifespan is the span of your life—how long you live. The average lifespan in the UK is 81.2 years. If you are healthy, you will probably have a longer lifespan.

When we say something times something, it is the same as multiplying in mathematics. We use a cross, or an X, to show multiplying or ‘timesing’ something. For example, two times two is four (2 x 2 = 4), three times two is six (3 x 2 = 6) and ten times two is twenty (10 x 2 = 20). If someone is fifty times stronger than you, then they are very strong indeed.

Just a small announcement: the Patreon Q&A live streams are changing and becoming pre-recorded videos. That means you can send in your questions whenever and see me answer them in the videos once a month.

God’s latest experiment was a disaster. He had been very busy lately working on Kushiel 5, a planet far away from Earth. Somehow, he had lost his notes on the earthlings. That wasn’t a problem. It happened sometimes. The creatures of Kushiel 5 weren’t too different, so he copied over his calculations and changed them a bit. It was lazy, yes, but he was God. He had made a whole day, Sunday, just for resting, so he could copy some calculations if he wanted to.

But something had gone very wrong. At first, He couldn’t understand what it was. Every new earthling was born like normal. They were small and cried a lot, and needed to be fed and given milk. There were no parents, because these earthlings were the first, so God used his million arms to hold them and his thousand breasts to feed them. But the babies didn’t change. They stayed as babies, and God couldn’t understand why.

Then, suddenly, fifty years later, the first group of earthlings changed very quickly. They grew beards and breasts, grew long hair and went from crying to shouting. Their hair was so long that they kept falling over. He knew he should have made their hair shorter.

The earthlings did not know how to look after themselves. They had gone from babies to adults in a few minutes. They couldn’t speak properly, and they started fighting and having sex with each other.

‘Stop it!’ God said, pulling two humans apart. But there were too many for him to stop, even with a million arms.

Had He added too little magnesium? Or perhaps there was an error in the brain coding? He reread his calculations, but he couldn’t find any errors. And the coding worked fine on the creatures of Kushiel 5.

He had also tried to make some animals to live with the earthlings. They were little things called dogs. They would accompany them through life and help them find food. The creatures of Kushiel 5 had a similar animal, called a hflungchapfst.

But the dogs were a disaster as well. They stayed all small and blind, and then after fifty years they grew, barked a few times and died, leaving grey-haired bodies all over the clouds. God had to stop the earthlings from killing each other and clean up all the dead dogs!

Annoyed, He let the earthlings have sex and waited to see how their pregnancies would go. He waited and waited. Finally, after 37.5 years, the earthlings gave birth and everything made sense.

How stupid he was! It was nothing more than a simple rounding error. Time did not flow in Heaven, and so God had to choose a time for each creature he made. The lifespans on Kushiel 5 were fifty times longer than on Earth. When He’d copied over the calculations, He’d made a rounding error which meant the earthlings and dogs only aged once every fifty years, but He hadn’t changed their lifespans.

God laughed, destroyed the earthlings and started his calculations again. One day, He’d get it just right.

If you enjoyed the story and want to say thank you, you can buy me a coffee on Ko-Fi. Just go to EasyStoriesInEnglish.com and click the orange button that says Buy me a coffee! Or you can write me a nice review on Apple Podcasts, or follow me on Instagram and Twitter, @arielgoodbody. Thank you for listening, and see you in two weeks!