Are you looking for a way to level up your English? Have you tried reading, but you always get bored, or find it too hard?

Then you should try my new book! Easy Stories in English is a collection of 10 short stories, with vocabulary descriptions and images. You can get it in four levels: beginner, pre-intermediate, intermediate and advanced. You can even reread the same stories in each level, and really level up your vocabulary.

To get the book, go to EasyStoriesInEnglish.com/Book.

Take your English to the next level today!

A tightrope walker in South Korea (Rhett Sutphin CC BY 2.0) 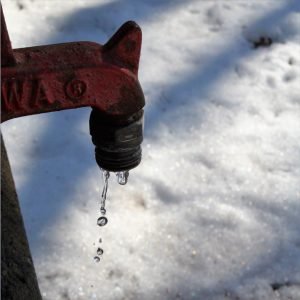 When it rains a lot, water might come into your house. This is a leak. If you have a hole in your roof, your roof will leak, and water will come into the house. Leaks are very bad, because you don’t want water in your house!

Water, and other liquids, fall in drops. So a glass of water is made of many drops of water. When it rains, lots of drops of water fall from the sky. If water falls very slowly, we can say that it falls drop by drop—you can see each drop because they are so small.

When something happens suddenly, it happens very fast, and you are surprised. Maybe you are driving your car, and a child suddenly runs into the road. You will have to stop very quickly because you don’t want to hit the child. Or maybe you live in the UK, and it suddenly rains very often.

When you walk, you take steps. A step is when you move your foot. Your phone can tell you how many steps you take in a day. Some people try to take 10,000 steps a day, because they think that is healthy. If you are moving slowly, you can say that you are moving step by step.

When you imagine something, you see something that isn’t real. For example, maybe you are hungry, so you imagine a hamburger. You see a hamburger in your head, but of course it isn’t real. Aww! Children often imagine friends and tell everyone about their imaginary friends, but of course other people can’t see them, because the child imagined them.

A US soldier shooting a gun

When you shoot a gun, and the past tense is shot, you hold the gun and press the button, and the gun goes BANG! You shoot a gun, or a pistol, when you want to kill someone. Or maybe you shoot them in the leg so that they can’t move. Shooting people isn’t nice!

Police use handcuffs on people when they arrest them (NATO Training Mission-Afghanistan CC BY-SA 2.0)

If you enjoy the podcast and want more, you can support me on Patreon. For just $2 a month you can get exercises with each episode, and for $5, you get an extra story every month, as well as Elevenses with Ariel, a daily conversational podcast for intermediate learners. Last week I talked about how I drank lots of salt and threw it all back up—I don’t recommend this—as well as a very famous plastic tunnel near where I live. Seriously, it’s amazing. You can support the show and get all the extra content at Patreon.com/EasyStoriesInEnglish. That’s Patreon.com/EasyStoriesInEnglish.

A big thank-you to my new patron, Sergey. Thank you so much, Sergey. Your support really means a lot to me.

Have you ever had a leak in your house? Maybe it happened at night, during a storm. That’s always the worst. So you put a glass or a bottle under the leak. Maybe, if you’re very bored, you watch the glass, and see how quickly it fills up.

Of course, the glass fills very slowly, drop by drop. First, there’s no water. Then there are a few drops, but it’s still very little. It feels like the glass will never be full. But then suddenly—look, the glass is a quarter full! And now it’s half full! And suddenly, the glass is full. Now you remember that you are not watching some fun film, but a leak, and you have to empty the glass and put it back.

It felt the same watching the tightrope walker. How long had he been standing on the tightrope? It felt like hours. He moved so slowly that it looked like he would never get to the end.

But just like a glass of water filling with drops, the tightrope walker moved. Just like the glass fills drop by drop, he moved step by step. And they were small steps. The tightrope walker didn’t have to hurry. He had all the time in the world. He was having fun.

The tightrope walker didn’t think about death. He just moved step by step. And suddenly—look! He was a quarter of the way across! He was halfway across! Soon, he would make it there.

The world watched as the tightrope walker danced. Yes, it was a dance to him. Each step was like the step of a tango. The steps were simple but they had a beauty to them. He had practised again and again. He could walk the tightrope with his eyes closed, probably.

The people began to shout and cheer: ‘You can do it!’ ‘He’s three quarters of the way across!’ ‘Just a bit more!’ Everyone’s hearts were open to the tightrope walker. They did not imagine him dying now. They imagined him making it to the end. They imagined the feeling, when he would make the last step, and everything would be OK.

But not everyone loves tightrope walkers. Not everyone can see beauty in a leak. Some people just see water going where it shouldn’t go, or men walking where they shouldn’t walk.

These buildings did not belong to the tightrope walker. He had entered them without asking. He had thought that the people would love him, so it did not matter.

Blood was coming out, drop by drop. It was falling down, hundreds of metres, to the street below. The people saw the tightrope walker’s blood falling, and they screamed.

The tightrope walker did not scream. He did not make any sound. He could not believe what was happening. He was still standing on the tightrope, and he had been shot in the leg. But he did not fall.

‘Why?’ said the tightrope walker.

The tightrope walker laughed. ‘I know. But if you just wait a bit, I’ll make it to where you are. Then you can arrest me. How’s that?’

The world watched below. They could not hear the words, but they imagined what they were saying.

Other people started shouting. Soon, everyone was shouting. But the cold man did not listen to them.

‘I don’t like waiting either,’ said the tightrope walker. ‘I’ve been waiting ten years to walk this tightrope. So please, just wait a bit.’

And the tightrope walker started walking again. He was so close to the building. He could make it!

‘He’s going to make it!’ the people cried. And again, they imagined how it would feel when he took the last step.

But the cold man did not like waiting, or imagining things, or being happy.

‘Shoot him in the heart this time.’

The cold man turned around to leave. He waited for the sound of the man being shot.

But the sound did not come.

The policemen looked at the tightrope walker, and then at the cold man.

‘He’s breaking the law,’ said the cold man. ‘He broke the law when he entered the building. That’s enough reason to shoot him or arrest him.’

‘But it’s so beautiful!’ said the policeman. ‘Can’t he live? Why do we have to do this?’

‘You’re not a real policeman!’ shouted the cold man. ‘Do your job!’

But the tightrope walker was there now. He had made it to the building. He took his last step and caught the policeman.

‘Oh my God,’ said the policeman, looking over the building at the street below. ‘You saved my life.’

‘And I’m going to end your life!’ said the cold man.

Like water from a leak, the cold man fell. He hit the road, and his blood met the tightrope walker’s.

It was finished. The tightrope walker had made it. The cold man had not.

‘I don’t understand,’ said the policeman, taking the tightrope walker inside the building. He helped him with his leg that had been shot. ‘Why did you do it?’

The tightrope walker laughed. ‘Why not? Does beauty need a reason?’

I hope you enjoyed the story. You might be thinking, ‘Hey, I think I know this story. I think this is a real story.’

Well, yes. There was a very famous tightrope walker who walked between the two World Trade Centre buildings in New York. There is a documentary about him called Man on Wire.

My story was inspired by that story. That means I got the idea for my story from that story, although I haven’t watched Man on Wire.

But honestly, I don’t really know if I can say that it inspired me. I didn’t think about it that much. Usually, when I write my stories, I just sit down and start writing and see what happens. I let my creativity do all the work, and usually it turns out… pretty good, I think?

At least, I like my stories, and hopefully you liked this story, too. I have actually never seen a tightrope walker in real life, but now I kind of want to.

Third-person point of view
2 comments on “The Tightrope Walker”